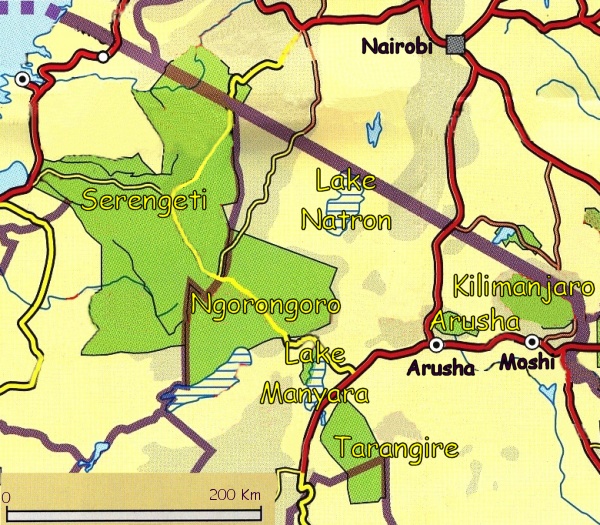 Tanzania has consistently been rated as the top safari destination in the world. Specifically, northern Tanzania offers the famed Serengeti National Park and Ngorongoro Crater. The location of these parks makes it possible to include both a Kilimanjaro/Meru climb with a safari. In fact, Tarangire, Lake Manyara, Arusha National Parks along with Ngorongoro Conservation Area are close enough to Moshi/Arusha that a safari day trip is possible. Most often, at least a three day safari is recommended to enjoy several of these destinations. If you desire to visit the Serengeti, a minimum of four days is best. Accommodations range anywhere from basic camping to top quality luxury safari lodges. Contact us with your interests and we can help you construct the ideal itinerary for you.

You might have heard the name, or watched a documentary on National Geographic, but to experience it is an experience of a lifetime. The Serengeti National Park is one of the most incredible places on the planet. What you might have seen on television or read in a book cannot do justice to the actual experience. It is just out of this world. This is the largest of Tanzania's national parks, measuring 14 763 sq. km-s. The park name is derived from a Maasai word meaning ««endless plains» and houses the largest concentration of wildlife in the world.

The Serengeti is renowned for the huge concentrations of wildebeest and zebra. Approximately 1 500 000 wildebeest and 250 000 zebra migrate annually in a circular pattern between the Serengeti National Park's Western Corridor and Kenya's Maasai Mara Game Reserve. Contrary to belief, the migration of these animals is a continuous affair with stopover points along the way. These migration trends are dependent on the rains.

During late November or December through to May / early June, lines of Wildebeest (sometimes up to 40km long) can be seen on a journey which can be up to 800 km long. These vast herds of grunting and snorting animals consume a staggering 4000 tones of grass each day. Hot on their heels you will find the ominous and ever present lion, cheetah and hyena. They are particularly interested in the calving season that coincides with the migration off the plains. In a period of only 3 weeks, some 400 000 cows give birth. Unlike most antelopes who seek cover, wildebeest prefer to calve in open terrain, which provides another breathtaking spectacle. These new calves provide easy pickings for larger scavengers and cats. This is the reason why wildebeest calves are able to be up and running within 4 minutes of birth. The best time to witness this is between the end of January to February

The Seronera Valley provides for some of the best game viewing. Jutting kopjes provide a vantage point for lion to sit a gaze on the herds and plan the next meal. June and July sees the animals moving off to the Togoro Plain on the border of the Grumeti River. This presents an obstacle for the vast herd, as they have to cross the queues of the eagerly awaiting crocodiles. August to September sees the animals moving off to the Lobo area and crossing the Mara River. Most of area where the herds make this dangerous crossing has both river banks inside of Tanzania. Many of the herd then cross into Kenya for a time before returning back south.

Regarded as the 8th wonder of the world. Granted the status as a World Heritage Site in 1978 and an international Biosphere Reserve in 1981, it is one of the most diverse and fascinating areas of Tanzania. The Ngorongoro Conservation Area (NCA) is home of Ngorongoro Crater. Geologists estimate that it was formed some 2.5 million years ago from a volcanic mountain sinking due to inactivity, and was initially thought to be higher than Tanzania's famous Kilimanjaro. The crater has evolved into a unique and integral part of Tanzania's eco-system.

The crater is actually a caldera, measures 22.5 km's across and the rim walls stand 600m high. Views from within and from the rim are breathtaking. The crater houses 30,000 animals, and a large variety of birds, which rarely move from the area due to the availability of water through wet and dry seasons. Black Rhino, which are on the endangered list, can be found scattered throughout the base of the crater. Visitors often get a look at one of these spectacular animals. This is also one of the few places where the «big five» can be found in a small area, namely Elephant, Buffalo, Rhino, Lion and Cheetah. For those who don't know, the big-five were given this name due to the extreme danger and cunning these posed to early hunters. Buffalo for example, have a habit of playing dead after being shot. Once the hunter approaches to see his «kill» the buffalo rises and mauls the intended killer to death. The main water source for the animals in the crater is Lake Makat. In and around this lake are thousands of lesser flamingos. The lake is pretty much right in the center of the crater.

NCA is not a National Park, but a conservation authority administered by the government of Tanzania. Due to the diverse nature of the area the conservation authority is attempting to co-ordinate the many needs of the people accessing it. Main conservation projects include wildlife, people and culture, forestry, archaeological and pre-historical, education and obviously tourism. The area is in such demand by all the aforementioned factors, that there a definite need to manage these areas viably. Visitors are therefore requested to respect the rules laid down by authorities to preserve this naturally rich area.

A short journey from the crater will take you to one of the most famous archaeological sites, called Laetoli. According to scientists, footprints of animals and ancestral humans who walked the earth 3.6 million years ago can be found. Along with this, at Olduvai Gorge, you can see the claims of human evolution from 2 million years ago. These sites were excavated by the famous Dr Louis Leakey and his wife Mary and makes for fascinating viewing. A trip to the museum and presentation is definitely recommended.

A short trip down the road and one will encounter the Shifting Sands. This is volcanic sand formed into a dune, and drifts along in its exact same shape down a large plain forced forward by continuous winds. These sands have religious significance to Maasai, and its progress has been marked back as far as 1969. The beauty of the area cannot be put into words. From ancient volcanic activity, all around one can see hills, mountains, kopjes and plains. From the rim of the crater one can see to the Southeast, Oldeani Mountain. Water collects in the mountain's ragged crater and flows down into Lake Eyasi. On the northern side, one will come across Makarut Mountain, with Sadiman on its shoulder. Makarut can be seen as a landmark from anywhere in the Serengeti plains. Sadiman Mountain is an old volcano whose ash preserved the Laetoli footprints. Another mountain to the north is Olmoti. Rainwater is also caught in here, and feeds the Mandusi Swamp, which in turn feeds Lake Makat, in the center of the Ngorongoro Crater. From the rim of another crater called Empakaai, one can see the striking cone of Tanzania's most recent and still active volcano, Oldoinyo Lengai.

Tarangire National Park is indeed one of the hidden jewels of Tanzania. This park measures 2600 sq km's and boasts a concentration of wildlife second only to Ngorongoro Crater. It features an impressive amount and array of bird life and plant life. Situated only 160km's from Arusha, the park is nestled to the south of the large open grass plains of southern Maasailand. It is named after the Tarangire River, which runs directly through the center of the park and is the only permanent water source for the animals. Along the banks of this river you will find herds of wildebeest (or gnu) and zebra, followed by Grant's Gazelle, Thomson's Gazelle and many others. Lurking in the background lion and leopard keep a watchful eye on a possible meal. The park offers views of grass and floodplains with impressive baobab and flat topped acacia trees scattered throughout. During the dry season the park may look quite ordinary, but activities continue even more earnestly due to the now increased competition.

Lake Manayara is one of the most scenic parks that you will encounter on your journey in Tanzania. Measuring only 330 sq. km, of which the lake occupies 230 sq. km, it is ideal for a day trip and its location make it easy to combine with a trip to Ngorongoro or Serengeti.

Lake Manayara is situated on the base of the escarpment of the Great Rift Valley. It derives its name from the Maasai word "manyara" which is a plant known to us as Euphorbia tiraculli. This plant is used by the Maasai as a hedge to form a stockade for their cattle. As you approach the village Mto wa Mbu (pronounced mtowamboe) from Arusha, the rift wall provides spectacular viewing. Whilst driving up the rift wall, Lake Manyara appears behind you. The view is breathtaking, as you take in this massive lake with it's silver shimmer and surrounding vegetation.

Arusha National Park is an attractive little park located on the outskirts of Arusha City. Not many visitors visit the park during the year which is surprising due to the concentrations of wildlife that are found in the area. Although it is not on any path of the major migration routes of the wildebeest it still has an attractive array of wildlife and birdlife. Mount Meru (4566m) also forms part of this national park. Mount Meru is the 2nd highest mountain in Tanzania. See information about climbing Mt Meru on our mountain trek page. Walking and canoeing safaris are possible in this park. If you want to visit this park, we suggest that you only spend a day at the most here.